Eyesee, the result of a technological partnership with Squadrone System, will be tested in FM Logistic warehouses to:

Hardis Group, a digital services company and software publisher, has announced the launch of real-life testing of its drone solution designed to automate inventory-taking and inventory control in warehouses. The software publisher teamed up with Squadrone System to develop a fully assisted indoor drone, and international warehousing, transport and packaging leader FM Logistic to test the solution in real-life conditions in its warehouses. 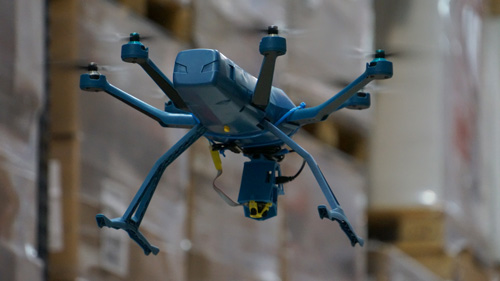 Aware of the logistics-related opportunities offered by the physical and technical characteristics of drones, Hardis Group filed a patent in 2015 for an inventory-taking drone to automate inventories and simplify and optimize inventory management in warehouses. Following a technological exploration phase, Hardis Group partnered with Squadrone System, which specializes in pilotless drones in extreme conditions and is well known for its consumer product Hexo+, to develop an initial prototype of an industrial indoor drone, called Eyesee.

The drone is equipped with sensors, enabling it to move around the warehouse autonomously, controlled by an operator. Its on-board camera identifies and captures inventory data which can be transmitted to any WMS on the market. The aim is to save time and increase productivity and safety in inventory and stock control operations.

Hardis Group recently signed an agreement with FM Logistic to test the solution at its logistics sites to check the system's ability to meet the sector's requirements. Innovation, which drives productivity, performance and flexibility, is a key value for FM Logistic, which has a committee of international experts dedicated to it. The aim is to imagine, design and deploy innovative solutions to improve working conditions for its employees and quality of service to its customers. So it was no surprise that the company agreed to get involved with the inventory-taking drone project.

FM Logistic opened up its warehouse in Satolas (France) to Hardis Group teams to conduct tests relating to flight conditions (site mapping, geolocation, lighting configurations, surfaces encountered by the drone, etc.) and the collection of information required for inventory-taking (label reading for example). In September, FM Logistic business teams will start testing the drone and the collection and processing of information by their tools.

Testing with FM Logistic will continue until the end of 2016. Hardis Group plans to commence production of the solution with Squadrone System in 2017.

Since its creation in 1967, FM Logistic has become an international leader in warehousing, transport and packaging. The independent family-run group is recognized as an expert in FMCG, distribution, perfume/beauty, industry and health markets.

Present in Asia, Eastern Europe, Central Europe, Western Europe and Latin America with over 20,000 employees, FM Logistic has a turnover of over a billion euros.

In addition to its international expansion, FM Logistic's development is focused on a strong policy of innovation, while respecting the environment. The group has pioneered 'pooling' (shared management of transport and logistics resources), for which it has received numerous professional awards.

Environmentally responsible by design, FM Logistic is a member of the Green Freight Europe program, an initiative aimed at improving the environmental performance of freight transport in Europe.

In 2015, the company developed CityLogin, an environmentally friendly solution to address logistics requirements for the final part of the journey in European cities.

The Squadrone System team, created in 2013, launched a Kickstarter campaign for the Hexo+ project, a fully autonomous drone that follows and films the user, raising over 1.3 million dollars. In a year, the company has transitioned from concept to reality and now has over 3000 users throughout the world. Based in Grenoble, France, and San Francisco, California, Squadrone System is conquering the industrial market with its autonomous indoor and outdoor flight technologies.