Founded in 1984, Hardis Group is a consulting and IT services company, a Salesforce integrator and a software publisher for logistics.

Our ambition is to accelerate the transformation of our clients' commerce, supply chain and information systems. We draw on our three core businesses to support them in their strategic, organisational and technological transformations.

We firmly believe that the key to helping our clients transform and grow is to create ever more value around cloud technologies (applications, platforms and infrastructure), data (AI, machine learning, connected objects, etc.) and automation (robots, drones, RPA, and more). 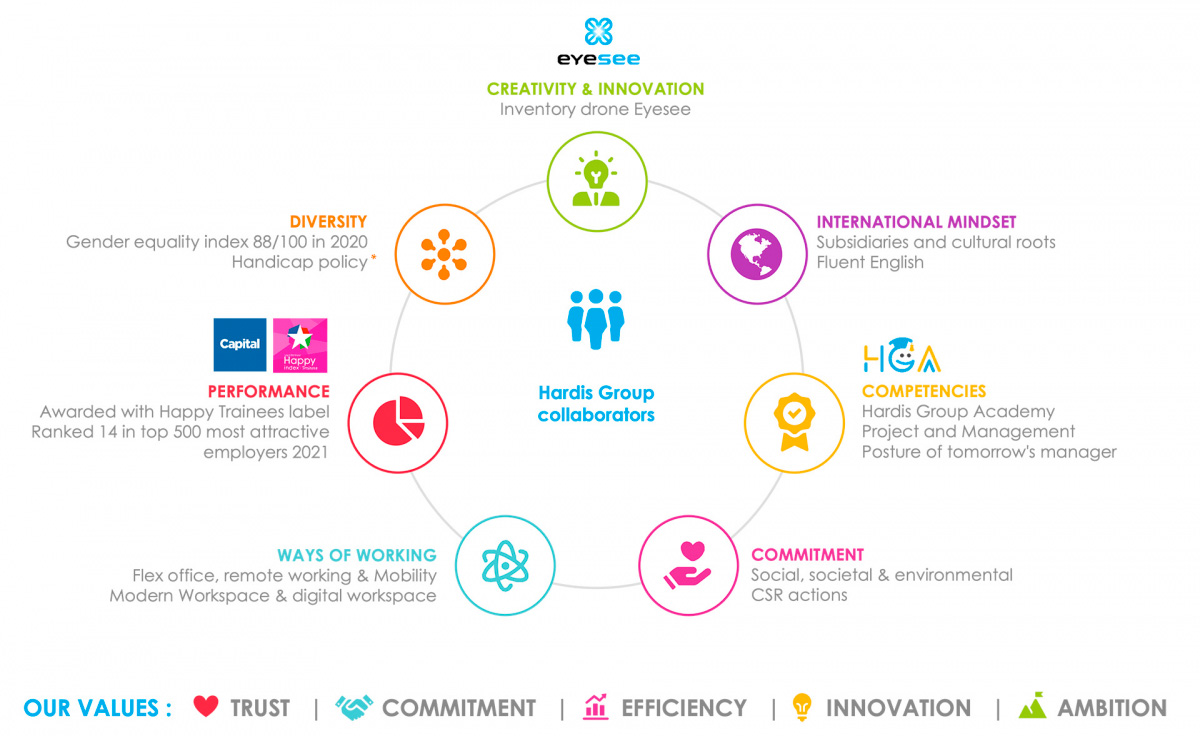 Creation of Hardis Group by Christian Balmain and three associates. Historically a partner of IBM, its primary purpose was the provision of services around the IBM/38 environment, soon turning in addition to software publishing.

Arrival of a new partner, Denis Vedda, who made the company's determination to diversify into a professional software package publishing a reality.
A computer-aided software engineering (CASE) tool for the IBM platform is developed: Adelia (which was to hold 65% of the market ten years later).

Positioning on the logistics market with the launch of the warehouse management software: Reflex WMS.

Integration of a consulting firm that was to become Hardis Conseil, a project owner support specialist.

Acquisition of Logi-Tech Informatique in Nantes and Rennes. Hardis Group is now present in the west of France.

Hardis Group sets its sights on the cloud with new private cloud offers and launches Reflex WMS in SaaS mode.

Hardis Group appoints Nicolas Odet and Yvan Coutaz as Vice Presidents, whose mission is to continue the company’s development while ensuring its independence at both capital and organizational levels.

Hardis Group celebrates 30 years in business and moves towards a comprehensive offering to drive digital and ominichannel transformation among its clients.

Hardis Group files a patent for an inventory-taking drone and focuses on innovation.
Nicolas Odet takes over as CEO following Denis Vedda's retirement.

Hardis Group undertakes a capital transmission to accelerate its development and to ensure its long-term independence. CM-CIC Investissement, a subsidiary of Crédit Mutuel Alliance Fédérale, and Bpifrance invest in Hardis Group. A group of around 30 managers hold nearly a third of the company’s capital.
Nicolas Odet becomes President and Yvan Coutaz becomes CEO. The founders support this process by reinvesting.

20
21
Opening of a subsidiary in Warsaw, Poland.

Pay gap between women and men

Difference in individual rate of increase

Increase in the year following return from maternity leave

Employee among the 10 highest earners