Nicolas Odet and Yvan Coutaz have been appointed Executive Vice Presidents, strengthening the group's management team which was formerly made up of the company's two founding leaders Christian Balmain, President, and Denis Vedda, Managing Director.

Services, business software publishing and facilities management company Hardis Group has announced the appointment of Nicolas Odet and Yvan Coutaz as Executive Vice Presidents. This decision demonstrates the aim of the two founding leaders, who are still at the head of the company, to strengthen the company's management team to continue its development while ensuring its independence both in terms of capital and organization.

Created in 1984 by Christian Balmain and Denis Vedda, President and Managing Director respectively, Hardis is both a software publisher and IT services company. The company, which generated turnover of €55.3 million in 2012 (projected results), has experienced uninterrupted profitable growth since its creation. It has more than 620 employees, all based in France at the head office in Grenoble and five branches in Lyon, Paris, Lille, Nantes and Rennes. In 2009, the group made its shares available to employees, who now hold 25%.

Nicolas Odet (36 years) and Yvan Coutaz (39) both joined the company in 2000, working their way up in different positions (*). As executive vice presidents, they are now in charge of defining the Hardis Group's strategy and managing its operational implementation.

"The appointment of two executive vice presidents is the logical follow-on to all the actions we have implemented in recent years to ensure our sustainable development and guarantee our independence: dual role of publisher and IT services provider, controlled growth, career and skills management prioritizing internal development, employee shareholding, and so on," explained Christian Balmain. 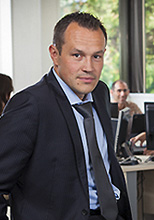 Nicolas Odet joined Hardis Group in 2000 and successively held the positions of Head of Sales and Marketing in the the New Technologies Skills department, Director of the Infrastructure and Facilities Management Department from 2006 to 2008, and Director of Services, Marketing and communication from 2009 to 2012. In particular, he led the transformation of Hardis' offering to cloud computing. Executive Vice President of the Hardis Group since early 2013 and a member of the executive committee, he helps to define the group's strategy and manage its operational implementation.

Prior to joining Hardis Group, Nicolas Odet held the position of business engineer at IBM (systems and storage division) and Sagem (network and optical fiber solutions).

Nicolas Odet graduated from Grenoble Ecole de Management in 1998 with a degree in technology management. 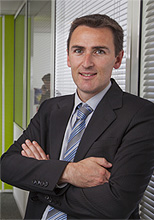 Yvan Coutaz joined Hardis Group in 2000 to participate in the creation of the Consulting & Project Owner Support subsidiary, for which he successively held the functions of organization and information system consultant, head of the project owner support activity and Managing Director in 2010. In particular, he helped to develop the Insurance sector which now represents 50% of the consulting activity. In early 2013, he was promoted to Hardis Group Executive Vice President. As a member of the executive committee, he helps to define the group's strategy and manage its operational implementation.

Yvan Coutaz started his career in a consultancy where he worked with key accounts in industry and distribution sectors. He graduated from Grenoble Ecole de Management in 1996 with a degree in technology management.