Europe's leading writing implement manufacturer has chosen Hardis Group's solution to streamline and automate logistics processes at its distribution warehouse. After deploying Reflex WMS, productivity among Pilot's logistics teams has jumped more than 60% and complaints are down by almost 70%. 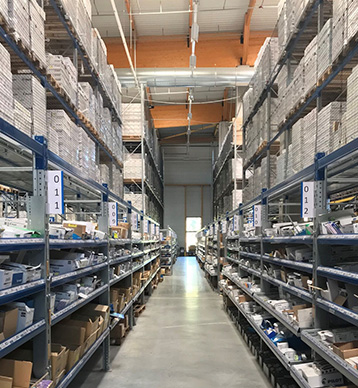 Pilot was founded in Japan in 1918 and is now the world's second-biggest writing implement manufacturer. The firm has a global presence, selling pens in more than 100 countries worldwide. At its European headquarters in Allonzier-la-Caille, France, it manufactures more than 40 million pens and distributes 100 million units each year to 30 countries across the EMEA region. In 2016, it posted revenue of around €150 million—20% of group revenue.

In 2011, Pilot Corporation of Europe decided to expand its site—already spanning 10,000 m²—by one-third to cope with strong business growth, boost its production capacity, and have its very own logistics (storage and distribution) platform. "In the past, we relied on a service provider to store 2,500 pallets. We wanted to have all our products together on one site, so we could shorten response times", explains Fabien Bessette, Logistics Manager at Pilot Corporation of Europe. To coincide with the expansion, the company decided to deploy a warehouse management system (WMS) so it could better manage its logistics processes, which it had previously done solely through its ERP system.

In spring 2012, Pilot commissioned a consulting firm to help it launch a call for tenders. Hardis Group's Reflex WMS was selected as the winning solution on the strength of its ability to manage both B2C flows (to retail outlets) and B2B flows (to in-country distributors within the region). In April 2013, following five months of testing and configuration, Reflex WMS went live at the new 4,500 m² warehouse, where Pilot manages 2,500 separate products and stores 4,500 pallets on 8-meter-high racks.

Since 2013, Pilot has introduced two major changes in a drive to improve its logistics processes. In January 2017, it deployed touch-screen RF devices for operators picking distributors' orders. "New hires get up to speed much faster now, especially during the busy back-to-school period", says Fabien Bessette. And in November 2017, it introduced a new mass collection system (picking three to six orders simultaneously) for retail sales, coupled with a post-picking weight control system to shorten the distance operators have to travel in the warehouse and to reduce the number of errors. "We've recently achieved even more productivity gains by linking Reflex with Balea so we can pick multiple orders simultaneously and weigh them in real time. We worked with the Reflex teams on this project to ensure our picking rounds were as optimized as they could be", explains Fabien Bessette.

Productivity up 60%, complaints down 70%

Five years after deploying Reflex, Pilot's European subsidiary is reaping the benefits on several fronts. The new processes have boosted productivity by around 60%. "Because Reflex gives us that all-important structure, it's delivering improvements across all our picking and shipping processes", adds Fabien Bessette. The tracking feature has made picking processes more reliable and provides the data the company needs if it receives a complaint. Now, the firm records just 400 errors out of the 650,000 order lines it processes every year—an almost 70% reduction in picking errors (and complaints). "We've also introduced an algorithm so that the system can calculate the number of pallets or packages for each order in advance. That helps us choose the right carriers in our transport management system (TMS)", says Fabien Bessette. Inventory anomalies are also down, and Pilot has been able to introduce cycle counting. What's more, the firm now finds it much easier to manage the warehouse in real time. It has installed screens so operators in the bays can monitor order statuses on the fly, using data supplied by Reflex WMS.

In the coming months, Pilot intends to start using Reflex WMS to manage inventory and release production orders in the factory next door to its distribution center. The firm is also planning to migrate to Reflex Web.