By offering an original development platform combined with agile project management, Hardis Group has provided the creator of the wine cellar with a powerful and reliable cellar virtual management application in line with the high-end image of the company and its products.

Hardis Group, a consultancy firm, digital services company and independent software vendor, announces that it has been chosen by EuroCave, a manufacturer and distributor of high-end wine conservation and service solutions for more than 40 years, to design and develop a mobile application for virtual management of wine cellars available on iOS and Android. Less than three months after launching the application, performed in agile mode, more than 10,600 downloads have been recorded. 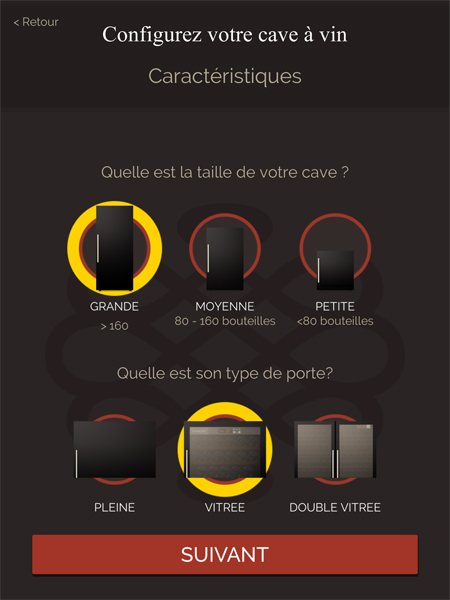 EuroCave, who created the wine cellar in 1976, is the world reference for keeping and serving wine in the high-end segment, both for private individuals and professionals. Its wine cellars, storage systems, air conditioners and humidors are manufactured in France and distributed in over 70 countries.

In 2013, the group decided to launch a free mobile application for wine lovers, enabling them to virtualize their cellar, see the bottles in it, manage them and write notes on them. But after two years of existence, the group found major malfunctions in the application, leading to poor feedback and application which were detrimental to its brand image. EuroCave was convinced that virtual winery books were useful, and so decided in early 2016 to completely rewrite the application with a new partner.

Choosing a development from a video game framework

Consultations were initiated on the basis of an isoperimeter overhaul. But very quickly, the people in charge of the project realized that rewriting the application was also an opportunity to challenge all its features and add some new ones, with the idea of improving the user experience. "We added to the specification the possibility of automatically configuring a EuroCave cellar from its bar code, creating a natural cellar displaying the location of the wines on a photo, or even importing an Excel file of bottles to supply the virtual cellar", explains Claire Pernet, product manager at EuroCave.

In July 2016, Hardis Group's offer was selected, in particular because of its bold choice for the development platform: Unity, the framework generally used for video games seemed likely to meet EuroCave's expectations for performance and fluidity of use. "In addition to the platform, we also liked the solidity of Hardis's proposal and the competence of its staff", Claire Pernet went on. The project was launched in September 2016, in agile mode, in the form of four successive sprints.

An application in keeping with high-end positioning

Initially, all the features were again challenged by the Hardis and EuroCave staff, before the functional breakdown corresponding to the four sprints. Special care was given to the acceptance phases: Ten people were called upon for each sprint, then about 50, including external and international people, for final general acceptance, to identify any bugs and improvement points, and to check the translations into the application's eight languages.

"From the outset we wanted to have the most complete and reliable application possible, in line with our high-end positioning", says Claire Pernet. The operation has been a success: launched on June 15, 2017 on the App Store and Google Play, the EuroCave application was downloaded more than 10,600 times in less than three months..

EuroCave's staff are satisfied and are now thinking about what comes next: in addition to developments to be made to the virtual winery book, new projects, outside the scope of the application, should soon see the light of day. "Hardis's daring but justified choices and their highly responsive staff augur well for a long-term, transparent and healthy collaboration", concludes Claire Pernet.