La Halle is modernizing its two logistics hubs, rolling out a new logistics plan, and deploying Hardis Group's warehouse management system in a drive to embrace the challenges of omnichannel retail and cope with its expanding business outside France.

Hardis Group, a consulting firm, digital services company and independent software vendor, announces that La Halle—the leading French retailer of affordable clothing, footwear and accessories for the whole family—has opted to deploy Reflex WMS at its two oldest warehouses, both located in France. The move is part of the company's strategic plan to modernize its logistics hubs and systems as its business grows, especially online, and as it expands its reach into French overseas territories, as well as into other markets outside France, including Africa and Eastern Europe.

La Halle, Vivarte's flagship brand, sells affordable clothing, footwear and accessories for the whole family at 870 stores across France and via its website, employing 7,200 people and achieving revenues of €1 billion. As the firm aims for a 30% increase in sales by 2023, with a focus on online and international customers, it has embarked on an overhaul of its logistics plan and is looking to modernize every aspect of its logistics hubs, tools and systems. As part of the plan, La Halle is aiming to adopt a more agile logistics model, manage an ever-growing catalog of products, split logistics flows by type (textiles and accessories at one warehouse, footwear and complete packages at the other), pool transport operations, make work easier for its employees, and better serve both its stores and its customers.

La Halle manages logistics operations from two warehouses in Indre, central France. By 2021, its hubs will measure a combined 111,000 m2. Both sites already have conveyor belts and one of them has a textile sorting unit. The company is now preparing for further heavy investment as it looks to mechanize some of its logistics processes, including a put-to-light sorting rack at the textile warehouse and a reverse logistics sorting system at the footwear hub. 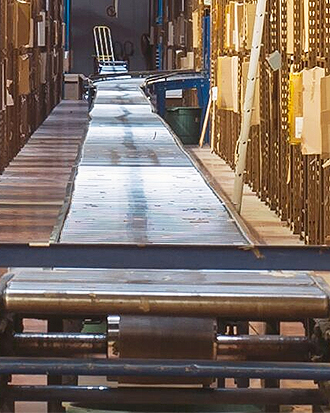 For the past 30 years, La Halle has used a proprietary WMS designed to cater to the specific requirements of its logistics operations. But that system can no longer cope with the changing face of the firm's business—not least when it comes to omnichannel flows and mechanization. "In 2016, we decided to invite bids from market-leading WMS vendors, eventually settling on Reflex WMS", says Jean-Michel Fabre, Supply Chain Manager at La Halle. "After putting the finishing touches to our plans, we drew up new specifications in June 2018 and asked Hardis Group to check that the application aligned with our new requirements and planned changes."

The company chose Hardis Group's system because its standard features catered to its requirements and because of its solid track record in the retail industry. "Before making our decision, we visited other warehouses to see the system in action", adds Jean-Michel Fabre. "In Hardis Group, we also found a company with a human face and a team of genuine experts. Now that we're working through the functional requirements, we're certain we've made the right choice."

La Halle will eventually use Reflex WMS for all logistics flows across both warehouses, where it ships some 90 million units each year from a catalog of more than 9,000 items. The application will be used in conjunction with mechanized systems such as sorting machines, conveyors and put-to-light sorting racks, and with La Halle's enterprise resource planning (ERP) solution, transport management system (TMS) and customs declaration system. The firm plans to have Reflex up and running at one hub in April 2020, and by April 2021 at the second warehouse.